JavaScript is disabled for your browser. Some features of this site may not work without it.
View Item 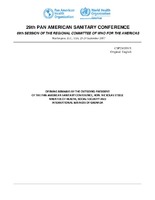 " On behalf of the People of Grenada and our Government, allow me to offer a warm and fraternal greeting to everyone present. I want to thank this noble organization for having entrusted Grenada with the presidency at the 28th Pan American Sanitary Conference held in 2012 of the Pan American Health Organization. Special mention must go out to brothers and sisters of our neighboring Caribbean territories including Puerto Rico who have been devastated by hurricanes Irma and Maria in recent weeks. Our prayers and thoughts also go out to our regional brothers and sisters in Mexico who lost hundreds of lives in recent earthquakes. Of course we cannot forget our friends in Texas and parts of Florida who also suffered damages at the hands of Irma. Apart from the psychological trauma and suffering which our people have endured and continue to endure these natural disasters truly expose the vulnerability of our small island states. The estimated damage caused by Harvey and Irma to the southern United States amounted to around 1.5 % of their GDP. The estimated damaged due to Irma and now Maria exceeds 200-500% of these countries GDP. I am particularly sensitive to our family in Barbuda and Dominica who are in the words of Prime Minister Roosevelt Skerrit’s United Nations General Assembly address “We as a country and as a region did not start this war against nature! We did not provoke it! The war has come to us!!”.Madam President the vulnerability of this region has also been exposed as shown in the recent outbreak of the Zika virus in 2016 which had tremendous impact on lives as well as our economies. This was on the heels of the of the Chikungunya epidemic in 2014 which has had considerable economic impact in the Caribbean as well as Central and South America. These events constitute major stumbling blocks for our overall development and more so for the health of the people and our abilities to achieve important developmental milestones like the SDG’s and other global targets. The people of this region are however resilient. I am confident that they will not only build back their lives and systems but built them back stronger..."